-Pussy Riot, from Putin Has Pissed Himself

Look at me, finally getting around to reviewing and recommending this book! Pussy Riot!: A Punk Prayer for Freedom is an essential read for anyone who identifies as feminist, radical, or badass. By now, you all know what this is all about, so I’ll focus on the book.

Recently published the Feminist Press, the book includes, “letters from prison, songs, and courtroom statements, plus tributes to the band that shook the world.” I picked up a copy of the book about a month ago, at this ridiculously-incredible event. When I started it, I was excited to read letters and poems written by Nadya, Katya, and Masha. They’re totally inspiring, obvs. One of the themes that hit me the hardest was that all three women declared that they are in fact Christians- and that as Christians, they believed and still believe their performance was the right thing to do. I mean, they were being prosecuted for “hooliganism motivated by religious hatred,” and here you have the band members writing to Patriarch Kirill about their performance, which they sincerely consider a prayer, saying, “The power and truth of our prayer did not shame the faithful, for surely the faith of a true believer, like the feelings of Christ, are too deep and universal- too filled with love- to be shamed. Our prayer shamed only Putin and his henchmen, and because of that, three young women have been thrown in prison… What would Christ say, knowing that in the sad days of Lent some Christians rejoice that three women have been detained in a terrible prison for praying?” Hashtagexcellentpoint.

What I was really surprised by though was how fascinating the courtroom transcripts were. It’s like, we all hear the cries for freedom and the global philosophy and solidarity surrounding this issue, but to take it down to the micro-level of “What EXACTLY is going down in the courtroom? What EXACTLY are they being accused of?” is really interesting. Here’s a doozy for you, an excerpt from a witness at the Church where Pussy Riot performed their punk prayer:

WITNESS: They had dresses that bared their shoulders and were very bright in color, and very contrasting! And they had hats of different colors too. And their tights were different colors! This was blasphemy, sacrilege, and an insult to my feelings, and my faith, and my ideals, and a defilement of my personage and my life choice! The pain has not let up.

DEFENSE ATTORNEY: Did you seek psychological or psychiatric help for your suffering?

WITNESS: I am an Orthodox believer. The healing energy of the Holy Ghost is a million times stronger than any psychologist.

DEFENSE ATTORNEY: Did the healing energy of the Holy Ghost relieve your moral suffering then?
Judge disallows the question.

Finally, the book ends with literary tributes and letters from feminist heavyweights like Yoko Ono, Peaches, Bianca Jagger, Eileen Myles, and Vivien Goldman. I actually really enjoyed the piece from Laurie Weeks, who I had didn’t know of until this book. So let’s end with that. Weeks says in her letter to Pussy Riot, “When I first heard the term Pussy Riot I laughed out loud instantly. The hilarity remained undiminished. Pussy Riot is the gift that keeps on giving, so thank you thank you thank you…. Pussy Riot is up to no good in the best way, practicing sacred art as a generative form of resistance, part of a long lineage of performative disruptions which Alejandro Jodorowski calls ‘psychomagic,’ because it’s about soul, and it starts with your name.”

Below are some photos from the Pussy Riot solidarity event at City Lights that my friend Ash and I attended: (It was kind of strange to look up pics from that night and find shots of us on some random dude’s flickr. Here they are, nonetheless.)

[Penelope Houston of the Avengers] 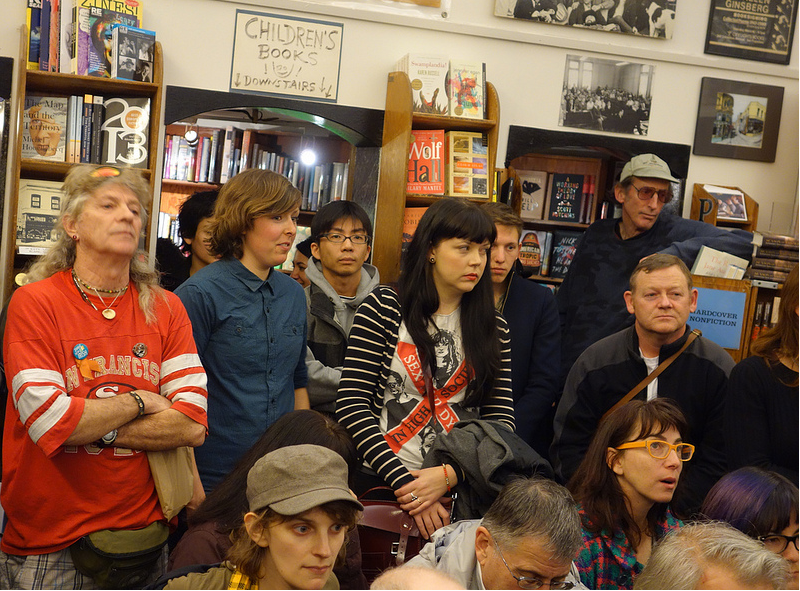 [The crowd- That’s me in the striped sweater and X t-shirt, and bff/radio co-host Ash in the blue button-down.]

[Crowd 2.0- I swear, we’re really not very serious people, despite what this photo is telling you.]

Okay, final-final fun fact- while Ash and I were at the Pussy Riot benefit, we met an awesome gentlewoman named CV. CV told us to write down a number, and call it for info about the secret “Dynamite Dames” event in a couple weeks. We got an address and a password, and headed to the event last Friday, on International Women’s Day.

[The illustrious CV, on stage]

[Punks Not Pretty- found on the bathroom wall at Dynamite Dames.]

[A blurry glimpse at the back of the space] 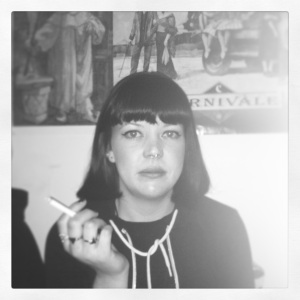 [I decided I needed to have a cigarette SOLEY because smoking indoors was permitted at Dynamite Dames.]