My dear friend Krissie recently attended a performance of one of her all-time favorite stories, the musical Hedwig and the Angry Inch, here in SF. I asked her to write about it for my readers, and now I’m simply dying to go see it myself.

Hedwig and the Angy Inch, the glam rock musical about a ‘slip of a girly boy from East Berlin’ trying to find his other half, is playing now at the Boxcar Theater in San Francisco until August 10th, Wednesdays through Saturdays at 8pm, and sometimes at 3pm. Show up a little early if you’re interested in having a cute gay boy pour a shot of whiskey from the bottle, straight into your mouth.

Hedwig’s story goes a little like this: After being molested by his father and ignored by his mother young Hansel (at this point) decides that the best way to get out of East Berlin and find his true soul mate is to marry an American GI and come to America. In order to do this Hansel get’s a sex change, but the surgery is botched, leaving him with no sex organs besides a ‘one inch mound of flesh’ (his words, not mine) between his legs. Hansel also adopts his mother’s name and becomes Hedwig.

After her husband abandons her in Kansas, Hedwig tries to make it on her own (the pronouns are killing me) by doing odd jobs and playing music. She falls in love with the son of a general, Tommy Gnosis, and they write beautiful music together, but Tommy can’t handle Hedwig’s abnormal anatomy and eventually leaves her, stealing all of the songs they wrote together, and going on the become a famous rock star. But this doesn’t stop Hedwig who forms her own band and follows Tommy’s tour, playing at a series of unlikely venues.

The Boxcar theater is set up with with a bar and tables so if you ever wished that you were one of the unsuspecting patrons a Bilgewater’s Restaurant watching Hedwig and her band perform, at least for one night, you can be. The actors are often close enough that you could reach out and touch them, and might even ask you to take a bite of their banana.

In an unusual twist, Hedwig is played by 8 people, some boys and some girls. And while this seems like a strange idea, it works flawlessly. Each actor captures a different facet of Hedwig’s personality. I left the show thinking, ‘maybe that role is too big for just one person.’ Everyone does a splendid job of making Hedwig’s character larger than life. Sometimes they will switch off, sometimes one will narrate while another one acts, and for the big musical numbers, they all sing together. Four Hedwigs talking to Tommy Gnosis or two breaking down crying when he leaves, just makes the events of the play have all the more impact. 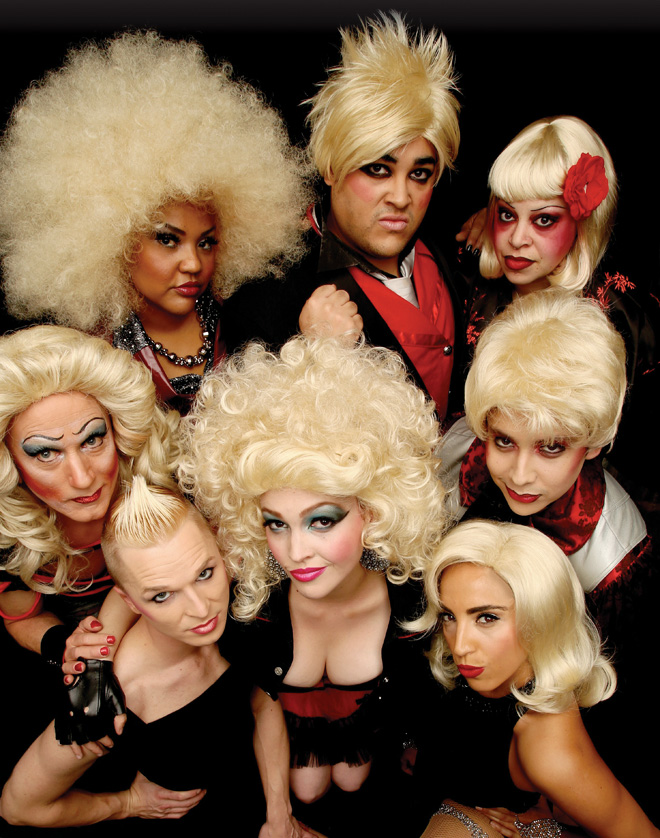 [A million (okay, 8) Hedwigs in the Boxcar production.]

Everyone in the play is wonderful and I wouldn’t change a thing, but I do have to mention, Amy Lizardo as Yitzhak. She blew me away. The part of Yitzak is somewhat marginalized in the film, but much more predominant in the play, and nobody could have done it better than Amy Lizardo. Her acting is phenomenal and her performance of The Long Grift is heartbreaking.

And while a lot of bad things happen to Hedwig, the show is triumphant, with the all-important theme that we don’t need someone else to become whole. The costumes and makeup are beautiful and the show is overall just extremely entertaining and fun.

Yay! Thank you, Krissie. I’m even more inspired to do our faux-queen photo shoot now. For anyone who wants to go see the show: you can purchase tickets from the Boxcar through August 10th.

[I took this photo of Krissie when she met John Cameron Mitchell at El Rio a year or two ago.]

8 comments on “San Francisco: Hedwig and the Angry Inch”