I recently had a chance to watch Raymond Pettibon‘s The Whole World is Watching: Weatherman ’69, and hell, it is everything I hoped it would be. Low-budget and DIY in the extreme, inappropriate, hilarious, and starring some of my favorite people: Kim Gordon, Thurston Moore, Mike Watt, and Dave Markey.

The 1989 film is definitely for… well, the kind of people who would seek it out. It won’t be nearly as fun if you’re not already into the artists and musicians described above, but if you are, I can assure you… you need to see this. Weatherman ’69 follows the lives of a group of young, radical/leftist terrorists (why yes, that group of terrorists- Weather Underground) but I definitely wouldn’t call it a tribute to their work. If anything, it’s a ridiculous criticism (a spoof, perhaps?) that features some truly absurd moments, like this one below:

Pettibon certainly seems aware of the white-middle-class-ness of his beloved ’60s countercultural revolutionaries. He openly portrays them as stoned and sort of stupid at times. I think he probably realized the same thing about the late ’80s hardcore/punk/alternative scene too, and was commenting his own subculture, tying the two movements together and crudely highlighting the privilege evident in both of them.

Mainly though, Weatherman ’69 is just a fucking good time. I found this clip too, which is fun to watch as a record geek and go, “Yes! They saved the Muddy Waters psych album!” and, “Ha, fuck that Simon and Garfunkel record.” It totally plays into knowledge that a record collector type would CRINGE at the sight of someone smashing vinyl.

Next up: Sir Drone. 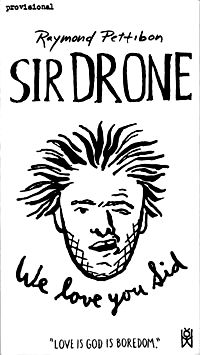 Also, thinking about adapting one of these Pettibon drawings into a tattoo: 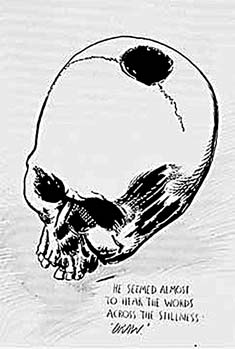