I’ll admit: I wasn’t totally on board with this collaboration… until I was unexpectedly given 4th row center tickets to see the two at the Orpheum in SF last night. In a word: YES.

David Byrne and St. Vincent killed it. They did songs from their collaborative album, “Love This Giant” (and even one from “Here Lies Love”) not to mention a handful of crowd-pleasers like This Must Be the Place (Naive Melody) and Road to Nowhere. The performance involved an 8-piece brass band and (can I just say?) some fabulously quirky choreography. Consider me sold.

I’d seen both artists before. St. Vincent dropped off my radar for awhile, but I actually prefer her more… “glamorous” identity these days, compared to when I saw her in a douche-bar in Santa Barbara (Velvet Jones, anyone?) in 2007. I saw Byrne in 2008, but this performance was more reminiscent of his concert with Arcade Fire at the Hollywood Bowl in 2005, which was similarly brassy, march-y, and generally triumphant. (Side note: I feel super-grateful that 18-year-old me got to see Byrne perform Crazy in Love.) 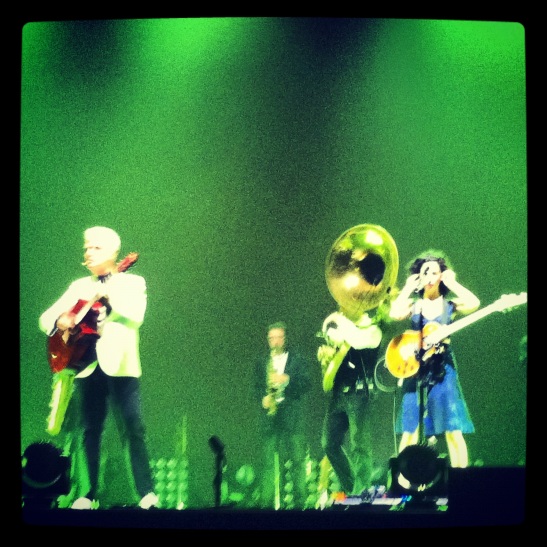 Here’s the video for their song Who off of their album “Love This Giant”:

This entry was posted on October 16, 2012 by ribbonaroundabomb in Noisegasm, San Francisco, Uncategorized and tagged brass, Byrning Down the House, David Byrne, Love This Giant, Orpheum Theatre, San Francisco, St. Vincent, Who.