Fun story about Lenny Kaye, by the by: When I used to DJ in Santa Barbara (I must’ve been 19 or 20) I once played this bizarre and obscure duet between Lizzy Mercier Descloux and Patti Smith once late at night. I got a call at the station. “What are you doing playing this song?” I said, “I know, it’s super weird. I’ll play something catchy/dancy next!” The voice then revealed this: “No! I love this song. I just only know a handful of people who have even heard of it. My name is Lenny, and I play with Patti Smith. Have since the ’70s. Nice to meet you.”

WTFFF. Anyway, I looked it up after that, and apparently he lives in Santa Barbara. One of my greatest radio moments for sure. Okay, sorry, song time: 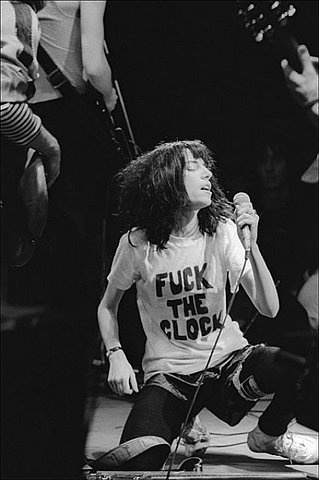 If you’re into it, you can pre-order Banga here.
Thoughts on the song, anyone? If anything, Patti is ever a poet.