Bobby Grossman, people.  He’s that guy- the one who truly lived and captured the spirit of the 1970s New York punk scene.  Grossman both documented and shaped the early punk aesthetic with his brilliant photography. 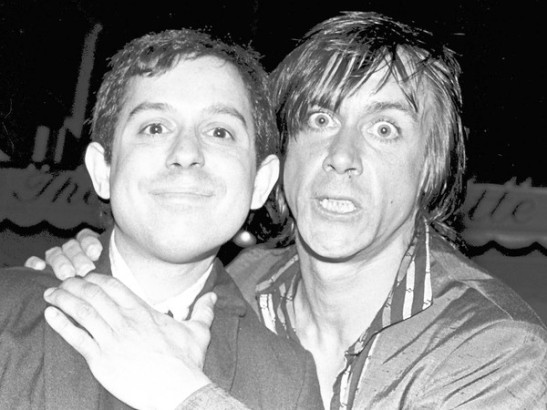 Now through March 16th, you can visit a solo exhibit of his photography entitled, Low Fidelity at Vertu Fine Art in Boca Raton, Florida. Even if you don’t live in Florida, you can buy the book Low Fidelity and make your coffee table 10x more awesome.  Basically, I’m stoked that this man exists. Read on for incredible insight and tales from Andy Warhol’s Factory, to CBGB’s, to the Chelsea Hotel. Relish in some incredible photos of Blondie, Talking Heads, Jean-Michel Basquiat, and more. Wherever you were at the time (I don’t care if you were fucking unborn) Grossman’s photos will make you kick yourself for not being involved in New York’s punk/No Wave scene of the ’70s.

Ribbon Around A Bomb: How did you first “get into” the New York punk and No Wave scenes?
Bobby Grossman: Chris, Tina and David (of Talking Heads) moved from Providence (the Rhode Island School of Design, more specifically) to NYC and invited me down to CBGB in 1975. 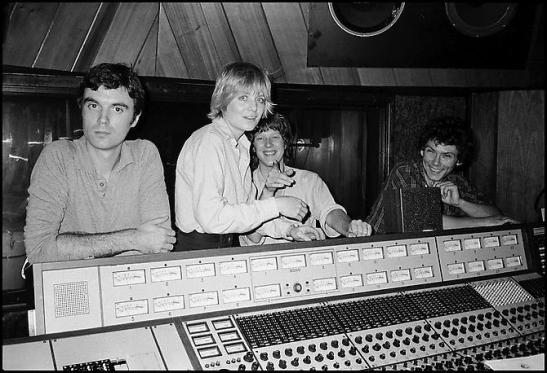 RAB: Your style of your photography reflects the attitude and aesthetics of punk- gritty, candid, raw. Was that an intentional stylistic choice or did it just turn out that way?
Grossman:  Yeah at first my camera was a Konica point and shoot. I would sometimes shoot from the hip – totally in the moment but sometimes the results were what you might expect – half of Richard Hell’s head and the rest of the composition was the dressing room graffiti at CBGB. I then moved on to a Rollei and then a Nikon FE SLR and I “focused” more on composition.
I was trained in art school to paint and draw, etc. My knowledge of photography was very basic. I could mostly relate to contemporary and pop artists but I did study the photos in fashion magazines. The photos in 16 Magazine, Tiger Beat and Teen Set probably left an impression as a teenager. I loved the work of Richard Avedon, David Bailey, and Billy Name.  But I  really appreciated and  better identified with the art of Richard Hamilton, Peter Blake, Ed Ruscha, Warhol, Raushenberg, Litchenstein, Mel Ramos, etc. 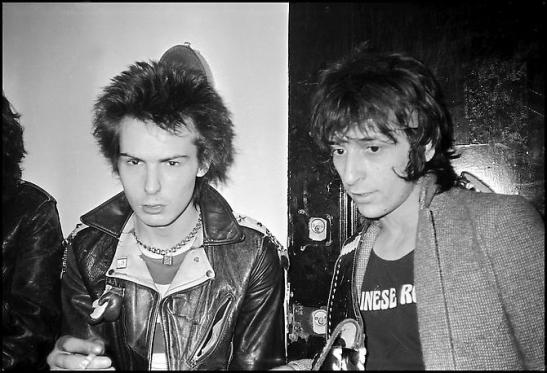 RAB: You have a fantastic series of photos featuring people eating cereal. What’s that about?
Grossman:  I photographed a number of friends eating Kellogg’s Corn Flakes. The idea originated at RISD when I took a Mick Rock photo of Lou Reed and put it on a box of German Kellogg’s Corn Flakes. Later on when I moved to NYC I did a series of Corn Flake photo sessions. I worked with Richard Hell, Robert Fripp, Jonathan Paley, David Johansen, Debbie Harry, Talking Heads, Stiv Bators, Glenn O’ Brien, Andy Warhol and Jackie Curtis. It ends up that some were more successful than others.

RAB: You went to art school with David Byrne. How did that influence your life trajectory? Was it always your plan to be a photographer?
Grossman:  At RISD I studied painting, silkscreen, and drawing and my BFA degree was in Illustration. I did collage and airbrush.  Spray paint came in handy too. I had established myself as an illustrator by the time I got to NYC, but I wasn’t fond of meeting deadlines. Rolling Stone had just moved from San Francisco to NYC. They gave me an assignment for their second NY issue – it was due 2 days before Christmas and I wasn’t happy. So I guess you could say I didn’t have the discipline or temperament suited to my chosen career and going out and having fun and documenting the people who eventually became my friends seemed like an easier and more fun plan. So for a year or so I assisted Interview cover artist Richard Bernstein at the Chelsea and then eventually took photos everyday for the next 5+ years.

RAB: Why did you photograph the punk scene? At the time, did you have any sense that you were documenting history?
Grossman:  Glenn O’Brien [creator and host of TV Party] sums it up pretty well:  “He liked to take pictures and pretty soon he developed a talent for being in the right place at the right time.  Or the wrong place at the right time.  It seemed like Bobby always had his black leather jacket, his Wayfarer shades and his camera and wherever you went he was there…  He was never on assignment.  I don’t think Bobby really thought about what he was going to do with the pictures, but I do think he knew that they were important.  That he was documenting history.  In a way he was a combat photographer, except instead of bombs and bullets it was drugs and alcohol and instead of the Vietcong it was bouncers.” 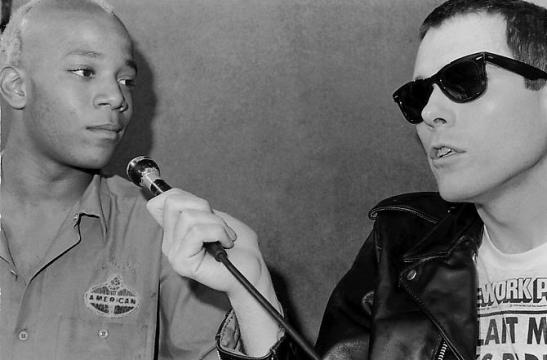 RAB:  Tell me about Low Fidelity- what’s the exhibition like? What prompted you to release the book this year?
Grossman:  Well before I met Gary and Bill at VFA in Boca Raton – I was working on a book.  Last April I began to put a book proposal together. My friend was loaning me her literary agent.  In September the agent asked me to do some writing. The text I had my friends contribute to the proposal wasn’t enough. I was ready to do some serious writing which would take some time and thats when the gallery contacted me – and not a minute too soon! I then took the prototype and incorporated it within the exhibitions catalogue.  Now I have begun writing a little and hopefully the catalogue/prototype will be helpful for getting a good publisher for the planned book.

RAB:  Was “making a living” a big concern back then? How did you do it?
Grossman: I worked “occasionally” for my Dad answering phones and packing boxes for UPS deliveries.  My Dad was a shirt manufacturer and had an office in the Empire State Building.

RAB:  Any good stories from when you lived at the Chelsea Hotel?
Grossman:  In all honesty – I kinda “behaved” at the Chelsea.  And I didn’t take many photos in my apartment either.  I did photograph Hunt and Tony Sales and I played around with the Polaroid but now in hindsight I regret not documenting Room 911.

RAB:  To me, your photographs have an honesty to them that comes from being an “insider.” How did actually being a part of the scene influence your work?
Grossman:  As you can probably tell by now I didn’t have a set plan. I kinda lived from day to day.  Looking back – I didn’t  often bring my camera when I visited The Factory. I lived down the block and I would go to the bank or lab and would just stop and visit Andy and the gang and rarely took photos. And TV Party eventually became a main focus for me for a few years – and that wasn’t planned.

RAB: What was CBGB’s like at that time?
Grossman: CBGB was a neighborhood bar. I had visited Max’s to see the Dolls before my first visit to CBGB in 1975 to see the Talking Heads. I felt very much at home at CBs and frequented it nearly every night  for 2 years. 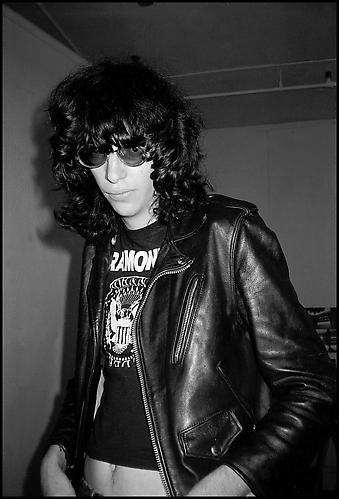 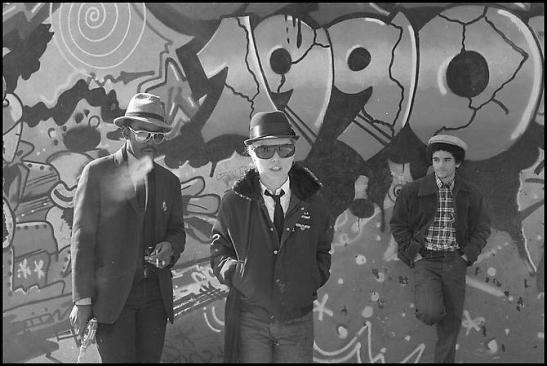 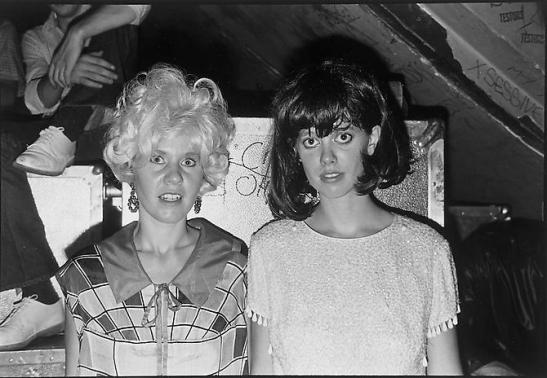 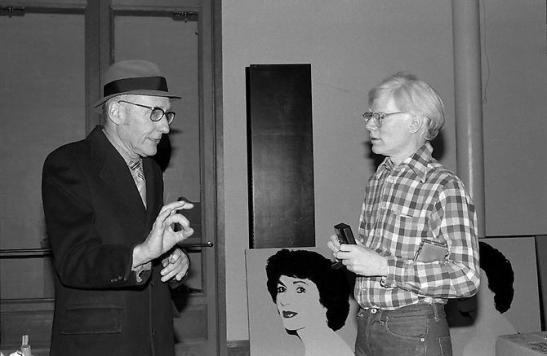 RAB: How did you start working with Andy Warhol?
Grossman: While still at RISD I was invited to meet Andy at the Factory by Providence friend Andre Leon Talley. Andre was a Brown University grad student and he left for NY a few years before I graduated. I met Andy in February 1976 and that day he looked at my work and we talked and I  also met Fred Hughes, Ronnie Cutrone and Vincent Fremont. Andy then phoned Lou Reed who was living at the time at the Grammercy Park Hotel and was in between management. He was suing Dennis Katz, Steve’s brother and Coney Island Baby was soon to be released. Lou played me a few unmixed tracked on his boom box. Beside his TV was a stack of cassettes. They were mostly Richard Prior tapes. He also looked over my artwork and I guess he was flattered since there were a few portraits of him.
And I actually never worked for Andy or the Factory. I contributed photos to a few issues of Interview. I worked as the assistant for cover artist Richard Bernstein for a year or so. He had his studio in the Chelsea Hotel off the lobby near the elevator and stairs. So I didn’t have to go too far to go to work that year. And I would often deliver the cover art for each issue to editor Robert Hayes so I did get to see how things operated at the magazine. Then I moved to 13th Street off the south part of Union Square and I routinely visited the Factory during my daily routine. I did a few planned photo shoots with Andy and the gang and on occasion something random or spontaneous. Glenn O’ Brien was an editor and also had a monthly column called BEAT and occasionally we would go to the Factory together – maybe to drop off his column or just to visit.

RAB: You live in Florida now. Is the punk scene or the people involved in it still a part of your life? What did that scene mean to you in the ’70s, and what does it mean to you now?
Grossman:  I moved to Satasota Florida a few months before 9/11. Prior to that I lived in Bedford and Armonk, N.Y. (Westchester) for 10 years.  During those 10 years – occasionally  I would get requests for different projects – exhibitions, books or magazine articles.  So with time removed the archives I created through the ’70s – ’80s were now becoming history. By then (89-90) on rare occasion I would go to CBGB. I never missed a Chris and Debbie (BLONDIE) event – wherever they would perform. Early ’90s I became a regular at Jackie 60 on 14th Street – in the meat packing district. (Johnny Dynell and Chi Chi Valenti’s club. I did take photos with a small Olympus Stylus film camera.
In 1996 I phoned a friend – Roberta Bayley and I we curated an exhibition “Cool and the Crazy – Images of Punk” which began at Candace Perich’s  new photo gallery in Ridgefield, Ct  and then traveled to Earl McGrath’s Gallery on 57th Street NYC and then Chris Murray’s Govinda Gallery in Georgetown, D.C.
During this time I saw a few of the last Ramones shows. I missed the final days of CBGB.

RAB:  Are you still photographing? What inspires you these days?
Grossman: I pick up a camera occasionally but not too often.  I like to take photos of my dog with my iPhone.

RAB: How do you take your coffee?
Grossman:  When I left NYC in 1990 That April  – I became obsessed with the TV show Twin Peaks.  However, I don’t love apple pie and I add a little milk to my coffee. 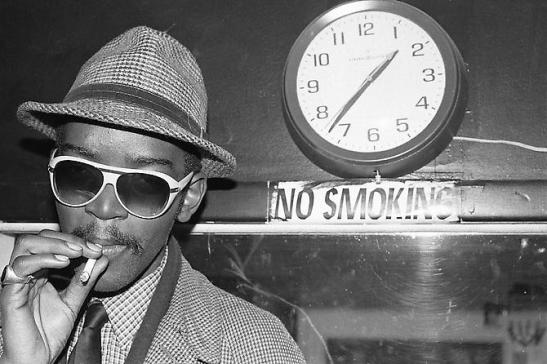 Seriously- buy the Low Fidelity book stat. And look out for more from Grossman soon.